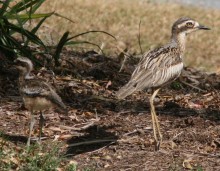 B. g. magnirostris
B. g. rufescens
B. g. ramsayi

The Bush Stone-curlew is a long-legged inland wader, with cryptic streaked plumage.  Its eerie call echo through the night air.

Adult: Most of the head and neck is grey streaked with black.  There is a white supercilium and a black line that runs down the side of the neck.  The chin and front of the neck are white.  The rest of the upper plumage is a darker grey, with the feathers are streaked with black.  Whilst the underparts are a lighter grey lightly streaked.  The eye is yellow.  The bill is mid-length, thick and black.  The legs are long and olive-yellow.
Juvenile:  Similar to the adult, but usually slightly paler, with downy feathers on head.

Throughout the dry woodland areas of Australia, except Tasmania where it is absent.  It needs water nearby.

Resident.  Flocks can congregate and travel over many kilometres.

The eggs are laid on the ground in a shallow scrape, in dry slightly timbered woodland, parkland, golf courses and any open areas.  Usually two eggs are laid.

The Bush  Stone-curlew population is estimated at about 15,000.  Considered common in most of its habitat, though also rated as vulnerable in some areas.

Beach Stone-curlew: Its plainer plumage and more distinctive facial pattern means that there should not be any real confusion between these two species.