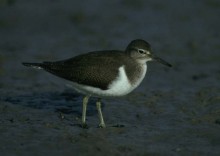 Small number spread through northern areas of Australia, smaller numbers in the southern states.  Usually found along coastal rivers and creeks as well as mangroves, but does occur in inland wetlands.

The Common Sandpiper arrives in Australia in August, some may travel through the interior to the southern states.  It leaves our shores in March and April.

The Common Sandpiper breeds in a variety of habitats through northern Asia, though not the high-Arctic.  Breeds in Korea, Japan as well as mainland  Asia.

Widespread throughout Australia in small numbers, so the estimated 3,000 birds may well be an underestimation of the true figure.

The distinctive plumage and habits make this species easy to identify.