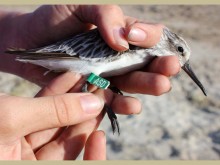 With support from the Brisbane Port Corporation we were able to set canon nets and achieve our first ever catch for many years by this method within the Brisbane Port development site. A team of 18, including Michael Linde from the Port Corporation, successfully caught and processed 6 wader species (32 birds) on 30th November, 2014. Among the processed waders were two Broad-billed Sandpipers, uncommon summer migrants to Moreton Bay.

Two nets were set in a reclamation pit that was dry except for a shallow watery corner. The original aim was to first catch a number of Little Terns and then focus on waders. Despite a two-hour attempt to encourage a flock of 150 Little Terns towards the net they preferred to remain on the water’s wet margins just outside the catching range. By mid afternoon we switched our attention to waders roosting by the second net on the drier mud flats. We estimated some 2000 small waders; mainly Lesser and Greater Sandplovers, Curlew Sandpipers and Pacific Golden Plovers, were within 200 metres of the catching area. With some skilful work, a flock of 300 landed in front of the net and began walking towards the catching area. The net was fired when about 55 birds were catchable and before the forward birds reached the safety no fire zone. The net fired well and the eventual catch was 32 birds. About 15 birds used channels within the mud to walk out from the net before we could reach them.

Among the catch were the two Broad-billed Sandpipers. These are the first in Queensland to receive engraved leg flags (Green ‘ASF’, ‘ASD’). Very little is known about these uncommon summer visitors to Moreton Bay. Hopefully, with future leg flag sightings now possible, we will learn how they use the Bay and some more specific information about their migration pathways and longevity. The other catch of note was a juvenile Pacific Golden Plover. A little smaller than an adult, paler and having not yet molted its primary feathers, it had recently successfully completed it’s first ever southward migration.

Our thanks to the Port Corporation and particularly Michael for their collaboration.