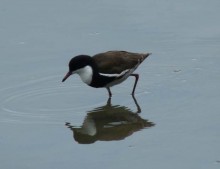 This Brisbane City Council reserve in the eastern suburb of Tingalpa is a reliable site for two species of wader, Latham’s Snipe and Comb-crested Jacana.  The main feature of the parklands is a large lagoon.  There is a small island in the lagoon and a narrow strip of land virtually divides the lagoon in half.  It is usually not difficult to see Comb-crested Jacana walking around on the waterlilies in both sections of the lagoon.  This species has bred here and in spring and early summer, young birds may be seen.  Along the shallow edges of the northern side of the dividing strip of land is the best place to look for Latham’s Snipe.  This species is often quite active through much of the day.

The park is a very popular destination for family picnics, but both key species appear to be unaffected, going about their normal routine.  Nevertheless, Latham’s Snipe is cryptic at the best of times.

How to get there: Travelling south on the Gateway Motorway, take the Wynnum Road exit about 2.5 km south of the Gateway Bridge toll station.  Turn right at Wynnum Road and after a short distance, turn left into Graystone Street.  The parklands are about 1 km at the end of this street.

Amenities/access: There is ample parking, toilets and covered picnic facilities in the parklands.  This site is easily accessible for disabled people.